On November 2, 2019, the Emigration Canyon Home Owners Association (“The ECHO-Association“) issued a press release for the Canyon Community that the water system operated by Emigration Improvement District (“EID”) had reported Lead Contamination of its drinking water system (see EID Notice below) to at least three (3) Emigration Canyon homeowners thereby leading to the following newspaper article by Environmental Reporter Brian Maffly of the Salt Lake Tribune:

We note that the original drinking water system installed by The Boyer Company LC for the Emigration Oaks PUD tested positive for Copper Contamination in 1993 and 1994 with the sole operation of Boyer Well #1 but then tested positive for both Lead & Copper Contamination after Boyer Well #2 was placed into operation sometime in 1995 for the same levels of lead at all testing locations.

Similar levels of lead contamination was subsequently reported to Emigration Canyon Advisory Committee Member Dick Moffat of The Boyer Company LC for the years 1996, 1997 and 1998.

Although initially denied, we now know that all EID water sources identified as Boyer Well Nr. 1, Boyer Well Nr. 2, Brigham Fork Well, and the Upper Freeze Creek Well have tested positive for Lead Contamination prior to being placed into operation or shortly thereafter.

The ECHO-Association further notes that Dr. Steve Onysko of the Utah Department of Drinking Water (“DDW”) had notified the Salt Lake County Health Department on July 31, 2015 that EID under the management of Mr. Hawkes of the Simplifi Company had been operating Boyer Well #2 without a valid operating permit and such a permit could not be issued as per correspondence from DDW to EID dated September 20, 1995.

It also appears that EID is operating both the Chlorinator for Boyer Well Nr. 2 and the Wildflower Reservoir without a valid operating permit as mandated under the Safe Drinking Water Act of 1974.

To date, Eric and Jennifer Hawkes of the Simplifi Company have refused release laboratory test results of lead contamination of the EID Water System as alleged in the Utah State Third District Court.

In select areas, The ECHO-Association will provide free water testing.

Please feel free to contact us with any questions concerns or comments. 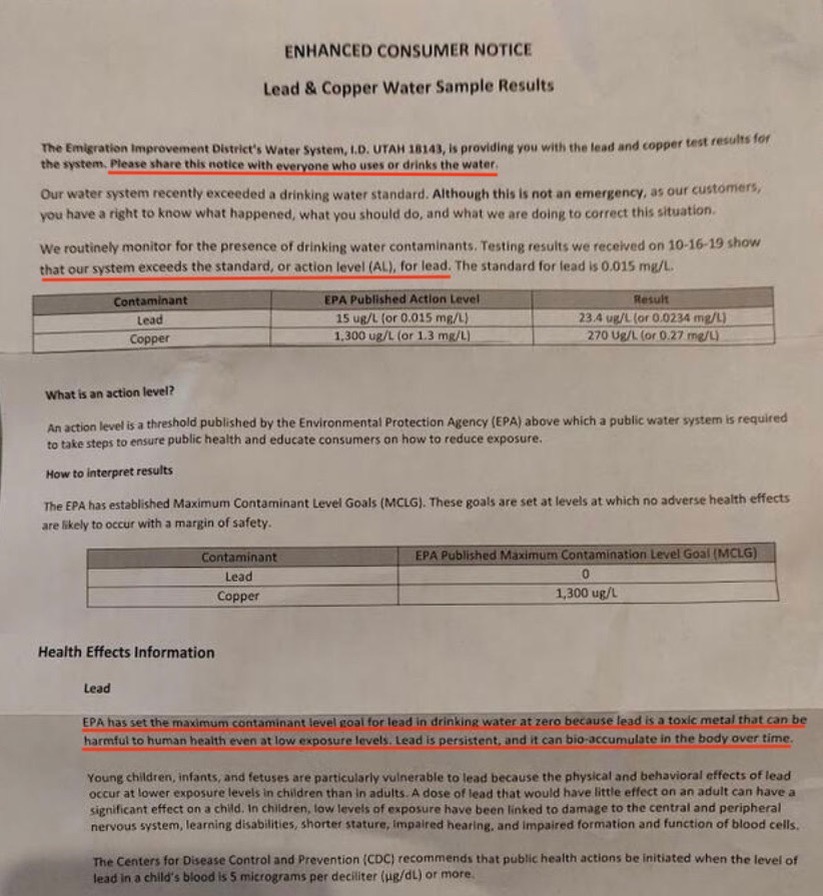